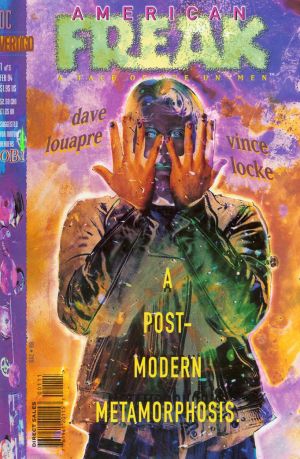 American Freak: A Tale Of The Un-Men Comic

Read American Freak: A Tale Of The Un-Men Comic Online

American Freak: A Tale of the Un-Men was a five-issue miniseries published by Vertigo in its early years. A spin-off of Swamp Thing, the series took a fresh take on The Un-Men (experimental, horrific creations of Anton Arcane) and took things further by introducing a second generation of Un-Men, primarily focusing on new character Damien Kane who was undergoing a de-evolution (as few would consider The Un-Men a step forward in evolution) from the human he believed he was into the Un-Man he was created to be. Written by Dave Louapre and drawn by Vincent Locke, the series had little impact although the idea of a new generation of Un-Men and Damien Kane's fate would be revisited over a decade later in the ongoing series The Un-Men which lasted for thirteen issues before its own cancellation.