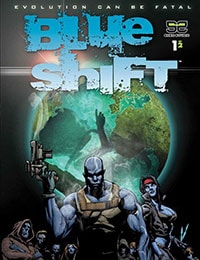 The year is 2061. Runaway climate change, more rapid than anyone predicted, has plummeted the world into environmental catastrophe. The American Great Plains is a parched dustbowl from the Rockies to the Mississipi. Europe is gripped by a new Ice Age in the absence of the Gulf Stream. Rising seas have transformed California’s Central Valley into a shallow inland sea, and drowned New Orleans and Venice. Coastal cities such as New York huddle behind great sea walls. A gigantic tropical storm called Leviathan rages endlessly off the Gulf of Mexico. Nations engage in bitter war over water and fuel. All told, over half the Earth’s population has perished in the last forty years.<br/>Amid this tragic backdrop, a new kind of human has begun to emerge: the Elohim, also known as Eli or Blueshift. They represent either the last hope of humanity...or its replacement.