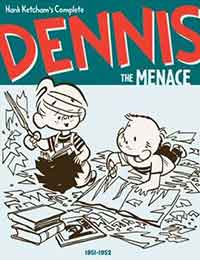 Dennis the Menace began on March 14, 1951 (four months after Ketcham's friend and colleague Charles Schulz started his own historic comic strip). He went on to become the second most popular cartoon kid in the world — after Charlie Brown, of course. Dennis the Menace first appeared in 16 American newspapers; by the end of 1951, he was appearing in over a hundred. The reason for Dennis' success is easy to figure out: It was one of the most brilliantly observed and empathetic comic strips about childhood ever drawn. Ketcham captured the mischievousness, rambunctiousness, and anarchy of a kid's world better than any other cartoonist. The strip appeals to both parents and children — while parents shake their heads ruefully at how accurately Ketcham caught the essence of children's natural zest for mayhem, children identify with Dennis and the chaos that he leaves in his wake — just a hop, skip, and a jump away from their own fantasy of themselves! Ketcham was a cartoonist with a vivacious line that was exquisitely suited to depicting adults and children. His gags were funny, subtle and touching. Ketcham drew Dennis the Menace from 1951 to 1994, when he retired and let his assistant take over the strip. This first volume of Hank Ketcham's Complete Dennis the Menace publishes every single panel strip from 1951 and 1952 in one handsome and thick hardcover volume resembling a Big Little Book on steroids.