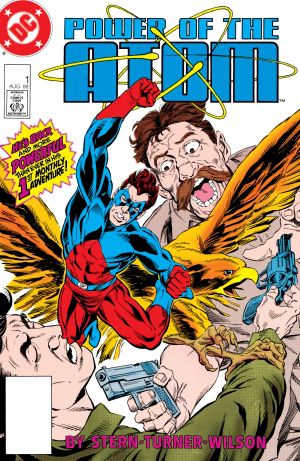 Power of the Atom Comic

Aug 1988. His years in the jungle have taught him how to survive anywhere...and now the world's smallest super-hero, the Atom, is back in an ongoing series! Ray Palmer returns to the United States, leaving behind the South American jungle civilization and its people he had embraced in the Sword of the Atom mini-series. But the America he comes home to is different and it's all he can do to readjust to the changes. And that's to say nothing of the physical changes the Atom has undergone since he's been gone. It's a whole new life of solid super-hero action for the Atom, But before you step into the Atom's bold new future, you might want to take a look into his past, beginning as one of the premier super-heroes of comics' Silver Age - the story is told in the pages of Secret Origins (1986-1990 2nd Series) #29, written and drawn by Power of the Atom regulars Stern, Turner and Wilson.

Power of the Atom Chapter (Issue) List
Following Comics
You need login to follow comics.
Related Comics
Power of the Atom Empowered and the Soldier of Love Shazam! Power of Hope The Power of the Dark Crystal Saban's Power Rangers: Soul of the Dragon House of X/Powers of X Free Previews Powers of X House of X/Powers of X Transformers 100-Page Giant: Power of the Predacons Captain Gravity And The Power Of Vril She-Ra and the Princesses of Power: Legend of the Fire Princess Captain Power and the Soldiers of The Future The Powerpuff Girls: Bureau of Bad Power Rangers: Sins of the Future Power of Prime Spider-Man: Power of Terror Drawing Power: Women's Stories of Sexual Violence, Harassment, and Survival The Power of SHAZAM! Thrill-Power Overload: Forty Years of 2000 AD: Revised, Updated and Expanded! Power Rangers Unlimited: Edge of Darkness