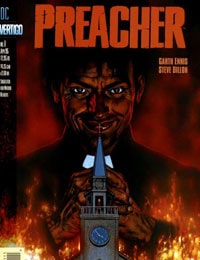 Creator-owned series from writer Garth Ennis and artist Steve Dillon (with all covers provided by Glenn Fabry). The series, based off an idea Ennis had while working on Hellblazer, tells the story of Jesse Custer, a down and out cursed/blessed southern boy preacher, a hard livin' Irish vampire (Cassidy) and the preacher's gun slinging ex-girlfriend (Tulip O'Hare) travel and fight the world to question The All Mighty Himself, as to why he quit his sacred task of caring for the world? Along the way a colorful cast of supporting characters walk into the story including a Cowboy who can kill anything (Saint of Killers), a once suicidal depressed teen http://www.comicvine.com/tc/4005-41303/who just happens to have a face like an arse (Arseface), and a zealot assassin by the name of Herr Starr. Buckle up for a crazy ride cause Vertigo's groundbreaking Preacher is out to get you. Widely regarded as one of the greatest comics titles of all time.