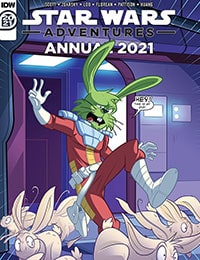 Desperate to win Jabba the Hut’s favor, Han Solo and Chewbacca take the galactic gangster a very special present. Han thinks the adorable hoojib will make a perfect addition to Jabba’s menagerie, but the cute critter hides a terrible secret. Cavan Scott (Star Wars: The High Republic) and Arianna Florean (Marvel Action) reintroduce a legendary alien species to Star Wars canon, 40 years after their first appearance! THEN, follow a group of troublesome kids on Cloud City when they come across a rare coin worth a pretty credit. But when the coin turns out to belong to the one and only Lando Calrissian, the kids quickly find out they are in over their head. Chip Zdarsky (Daredevil) and Jason Loo (The Pitiful Human-Lizard) join forces to tell this Bespin-based story.