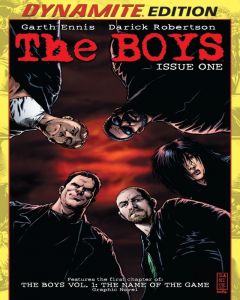 Garth Ennis and Darick Robertson bring you THE BOYS. Wee Hughie was an average guy with everything going for him. A fiancee at his side, things were perfect...at least until every thing was torn away by a super hero! In this world, the superheroes are ungrateful uncaring asses. The comic follows the story of Wee Hughie as he is recruited too and later joins "The Boys", a CIA black ops team dealing with super powered threats. The team consists of five super-powered beings made to deal with the incidents just like Hughie's. Butcher (a man who's wife was raped and killed by a super hero), Mothers Milk (a man who is forced to feed off his own mother's breast for his powers), Frenchman (a strange animal like man with unknown origin), the Female (of the Species) (a mute but deadly assassin with no past) and of course...poor Wee Hughie. In an interview, Garth Ennis had stated the series "may last up to 72 issues" and that it "will out-preacher PREACHER".