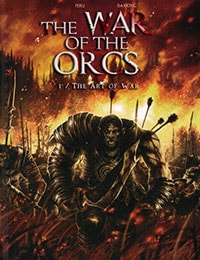 The War of the Orcs Comic

Read The War of the Orcs Comic Online

"For and by war, live and die in Orc". Obeying these millennial words, the Orcs plow in steel and blood the lands that are on their way. But for several years, Elves, Dwarves and Men have joined forces to exterminate orcs and decimate this race. Today, their victory is almost total. All that remains for them is to kill their king and his last brave men. Among the survivors, an Orc does not intend to flee before the enemy. His name is Kil'Tyrson and seems the only hope. Yet his eyes are pale, a mark of cowardice for the Orcs, and in his blood flows the most infamous of vices: cunning. Could it be that the last Orc to brandish iron on a battlefield is not the best but the worst? Screenplay: Peru, Olivier. Drawing: Daxiong.