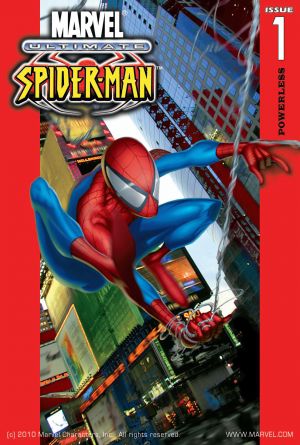 The OZ project started with Osborn Industries. Testing the ‘wonder drug’ on a variety of mammals and insects, Norman Osborn swears that his most significant invention is going to boost the country’s economy. A spider showed incredible results after being subjected to OZ - enough hope for Osborn to promise that the next stage would be humans. If only someone had put the lid back on the spider’s jar... Enter fifteen-year-old Peter Parker. Bullied at school for as long as he can remember, Peter’s only friends are Mary Jane Watson, a neighbour, and Norman’s son Harry, who seems to only be interested in Peter’s brains and what that means for his grades. During a tour of Osborn Industries, Peter suddenly screams as our favourite genetically altered spider bites into his hand and changes his life forever. Peter blacks out, as Kong, one of the high-school bullies, squashes the spider with his big boot. Waking up later in a New York hospital, Peter’s blood test is stolen on behalf of Norman Osborn, who worries that he could be about to be sued by May and Ben Parker, Peter’s aunt and uncle. Back at Osborn Industries, analysis tells Norman that the OZ is slowly killing Peter. Realising that he’s going to die anyway, and to save himself a big sum of cash, Norman gives Shaw the go ahead to kill the fifteen-year-old. Walking home from school, an SUV mounts the curb and guns the engine for Peter, but some spider-like reactions and acrobatics save Peter from danger. The driver gets out and brandishes a gun, as Peter runs to safety. Norman Osborn decides he wants to study Peter, not kill him. Back at home, Peter Parker realises that he can somehow stick to walls, and that nothing will ever be the same again.