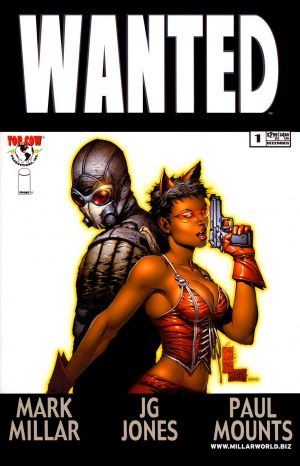 The first issue of Wanted starts with Wesley Gibson describing his life. The first few pages have his girlfriend cheating on him with his best friend, his boss making work hell, him getting chased home by "semi-literate cholo fucks" and going home to look online for diseases he might have. His life is crap and he knows it. Wesley states that his father walked out on him and his mother when he was 18 weeks old and then the man is shown. Wesley's father is a middle aged man with a big gut and a lot of money. He's about to start filming two younger men having sex (while explaining that he's not gay) when the building they are in is filled with bullets. Mr. Gibson jumps out the window, chases the attackers and guns them down. When he's about to kill the last one, he gets shot in the face by an unseen gunman. Following this scene there is a funeral for Mr. Gibson and members of the secret villain brotherhood that he was part of attend the funeral to discuss his death. The story switches back to Wesley and his horrible life where he meets Fox, one of the people who was at the funeral. Fox opens fire on a sandwich shop Wesley is at and abducts him, taking him to the secret headquarters of the villains and telling him about his father. Wesley meets the Professor and learns that he himself has super powers.